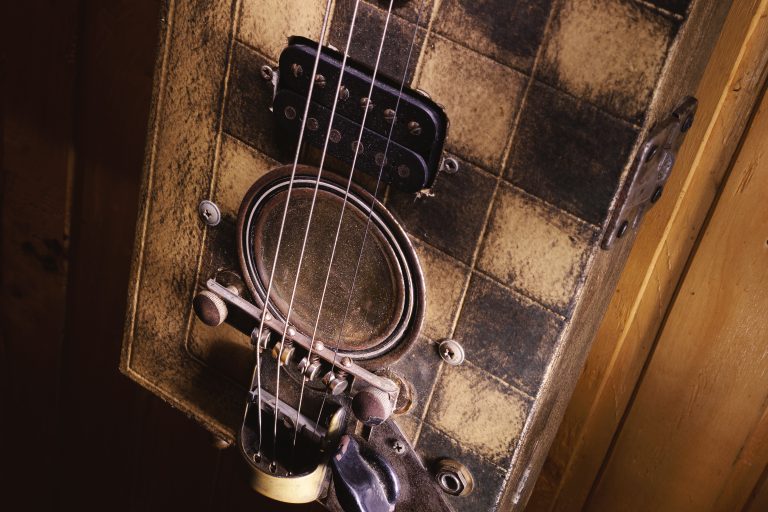 With lighter gauge strings or electric strings, some of the tunings we are about to go through may not be appropriate for your instrument. This could be because you have to wound strings high up which will create too much tension for the string gauge, causing them to snap.

In this guide, we are looking a nine cigar box guitar tunings that use a lot of different guitar strings. Let’s take a look.

Some Notes on Tuning Your Strings

There are some things you must keep in mind when tuning guitar strings. The strings on cigar box guitars are specifically designed to play a certain pitch using a certain tension. If you try to change the tune of a string much lower than it was originally intended, you’re going to create a lot of twanging and fret buzz. You will have even more problems if you try to tune them much higher as well.

Strings on a cigar box guitar that are made of wire will break and snap if they are put under too much tension. Be incredibly careful if you try to tune one of your strings up, keeping your face away from it in case it decides to snap and whip towards you.

This is a tuning that is typically used for playing blues and it follows the third, fourth and fifth strings of a standard guitar. There are a lot of alternative string choices here for your cigar box guitar, but the way we are showing you here is the most typical one.

Some people would prefer to use a different array of octaves but still use the GDG tuning, choosing a lower bass range. The higher top end here is ideal for strumming along to folk or country music.

Again there are more notes available for this common tuning which will be better suited to people who want to play fingerpicking guitar to country and bluegrass music.

Open D tuning is another common tuning that is often used on a three string cigar box guitar. There are a lot of ways you can use a standard guitar string pack to achieve DAD tuning.

Use the lower E string which is the sixth string as the bottom one for your guitar and then tune it down to D. Then take a G string which is the thrid on a standard guitar and tune it up to an A on your cigar box guitar. There are two options when it comes to the top string of your guitar. You can either take the E (first string) of a standard guitar and tune it down to a D, or take the second B string and tune it up to a D. It’s good to know you have a backup option here in case one of the guitar strings breaks.

To play this tuning with more bias towards bass tuning, use the following:

Lastly for this tuning we will look at how you can achieve a great treble range in a similar way that you would play it on a standard guitar.

There are some great cigar box players out there that use open E tuning because it gives you a looser string tension which is achieved when you tune the strings down from an open G to an open E.

Take the fifth standard guitar string, the A string and position it as the third one on your cigar box, tuning it down to an E. Next you will be using the fourth D string as your middle string, tuned to a B. The third string is a G on a standard guitar and this will act as your top string on cigar box guitars, being tuned to an E.

Instead of open tuning which is what we’ve been exploring so far, this time we’re looking at getting jazz tuning on your guitar strings. Typically jazz tuning takes four notes, but tuning to AEG on a cigar box guitar achieves a similar sound. It also makes it easier to move up and down the fretboard, using a slide or barre techniques to play plenty of jazz chords.

Once again you are using the fifth, fourth and third standard set of guitar strings for your bottom middle and top strings. Then you can tune them to A, E an G.

For classical tuning you use the middle strings of a standard set of guitar strings to achieve the right tone. The selection is good for playing in a melodic style and the top three wound strings are similar to that of a classical guitar.

You will take the A, D and G strings which are the fifth, fourth and third strings of a guitar. On your cigar box guitar, you will be placing these in the third, second and first positions and then tune them to the ADG pitches.

This tuning is classed as a root open chord and if you are someone who plays the ukulele, you should be especially intrigued as to how this is going to sound. A ukulele is tuned GCAE but because a ukulele is small it means that the instrument tends to be high pitched. You can get a similar sound but using a lower pitch on your cigar box guitar too. It gives off a happy sound and you can use the same chord shapes you would do on a ukulele, just taking off the E string as you go.

Again you will use the guitar A, D and G strings and then tune them to A, E and F as the bottom, middle and top strings of cigar box guitars.

Take your standard guitar strings of A D G and B and then use these as the fourth to first strings on a four string cigar box guitar. You can then tune these to GDGB which is a popular tuning for this sort of instrument.

We’ll be using some different strings to achieve this alternate tuning. You will need the sixth (E), fifth (A), fourth (D) and third (G) guitar strings to make the right sound. Place them on your cigar box guitar from bottom to top and then tune them up to a D, A, D and then down to an F#.

Using strings from a six string guitar at their normal pitches also gives the player a good few options for tuning. Have a play around with these and see how they feel. Eventually you will find one from our list that fits you the most.

Cigar box guitars are old school but still a very fun instrument to play if you want that real folksy blues sound. With a lot of different tunings on offer, a lot of which we’ve mentioned above, there are a lot of possibilities for both three and four string instruments. Remember to check out all of the other guides we have available on our website including the best guitar slide for you and loads of other informative articles.

What is the best tuning for a cigar box guitar?

The open G tuning which is GDG is probably the best and most common tuning you can use for your cigar box guitar.

What 3 strings are used on a cigar box guitar?

A D and G are typically the most common three strings on a cigar box guitar but an E string can also be used.