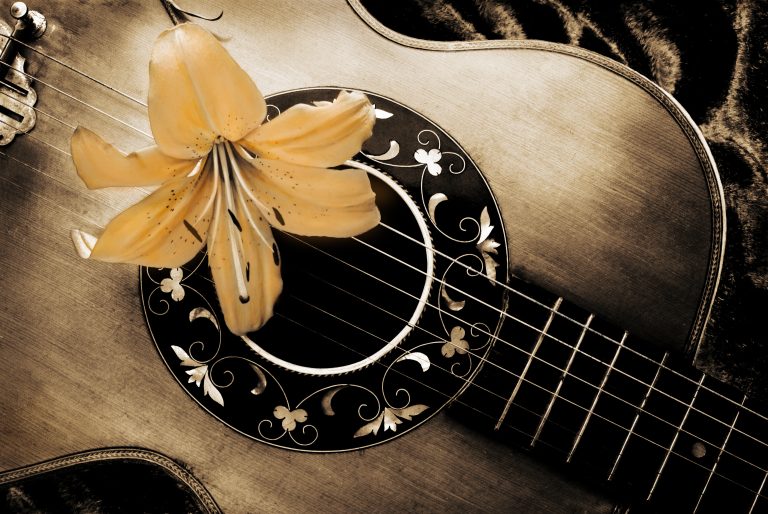 Anime music has become more and more popular in mainstream culture, especially with the comics and television series being more available online. We’ve put together some easy anime songs on guitar that you can play at home. While none of these are one string guitar songs, they are still achievable for beginner guitar plays. You can use an electric or acoustic guitar for these tracks and we’ve included a video with tabs for each one.

Black Rover is a piece by Vickeblanka and it is the third opening from the Black Clover anime series. There is a lot of different instruments you’ll hear including drums and the electric guitar. This is joined with the positive sounding singer with a loud tone that really gets you hyped up for the action ahead.

The more positive track is appropriate for the arc in the series and it’s lighthearted enough to be a fun one to play on your guitar.

Date 2 is a song by Radwimps and is featured on the soundtrack for the Kimi no Na wa film. The Radwimps are a Japanese rock band and the score was composed almost entirely by the vocalist, Noda Yojiro. Date 2 is actually a piano piece but this can easily be translated onto the guitar. If you have a friend who is also a fan of anime songs then this will make a great duet track.

One Punch Man is a truly engaging series and the music that goes along with it really makes it even better. There are a few versions of it but the guitar version is by far the best. The original words and music were written by Makoto Miyazaki.

Tabun translated to Probably was a song recorded by the Japanese music duo YOASOBI. It is a relatively new release, having hit the airwaves in July 2020 as a digital single. The song is inspired and based on the anime novel called Tabun by Shinano. The English version of the song was titled Haven’t and this has also been popular amongst anime fans.

Cinderella is the opening them from Komi Can’t Communicate. There are a lot of different opening and closing theme songs in anime but this one is really very good. The track is called Cinderella and has been performed by a Tokyo based Japanese rock band called Cider Girl. The song is upbeat and fun, putting a smile on your face as soon as you hear it. The lyrics are Tadano telling his love how he will always try and make her happy. How sweet!

Akeboshi otherwise known as Morning Star was recorded by LiSA and released in October 2022. The song was featured as the opening theme song for Demon Slayer: Kimetsu no Yaiba. You’ll be playing this track in the key of C# major with a common time signature and a 95 BPM tempo. It’s a lengthy one, being just over four minutes long but it really gives off the atmosphere of fantasy. The guitar riffs in the middle of the song are where you will want to focus the majority of your practice time.

7. Nanatsu no Taizai – Netsujo no Spectrum

Netsujo no Spectrum is the opening theme song from the anime series titled The Seven Deadline Sins. It was performed by the J-pop band called Ikimono-gakari. It’s a great song that introduced you to all of the action and adventure which is about to follow in the series. The lyrics are all about power, dedication and passion, with an emphasis on how important friendship is.

8. Ao No Waltz Eve – Josee, the Tiger and the Fish

Ao no Waltz is from the anime film Josee, the Tiger and the Fish which was released in December 2020. Eve is the singer and she performed the main track for the movie, the first time the artist has done so. The film is based on a novel written by Seiko Tanabe which was released in 1985. This will be the first anime interpretation of the novel.

Mushoku Tensei: Jobless Reincarnation is one of the most popular anime series of 2022 and the cool story, interesting characters and incredible art match the song perfectly. Tabibito no Uta is a song that features as the opening theme for this and it was originally performed by Yuiko Ohara. Translated into English the title means The Traveler’s Song. There was a choice of different songs for the opening theme but this one works well thanks to the medieval feeling of the track.

That’s it for our easy anime songs on guitar. We hope you’ve found at least one track you like from your favorite anime series. Remember to watch the videos included as these have the tabs you need to play guitar to the tracks. We have multiple other guides on popular songs here on a website so make sure to take a look at these as well.

What anime song has the easiest chords?

All of the anime songs we’ve mentioned in our list above have easy chords which you can play on electric or acoustic guitar. If you are having trouble finding the chords for each of these songs, we’ve included the tabs in each music video so you can play along with them easily. Many people say most of the songs from White Album are easy to deliver so make sure to check these out. If you want to learn other songs like these, take a look at our Disney guitar songs guide.