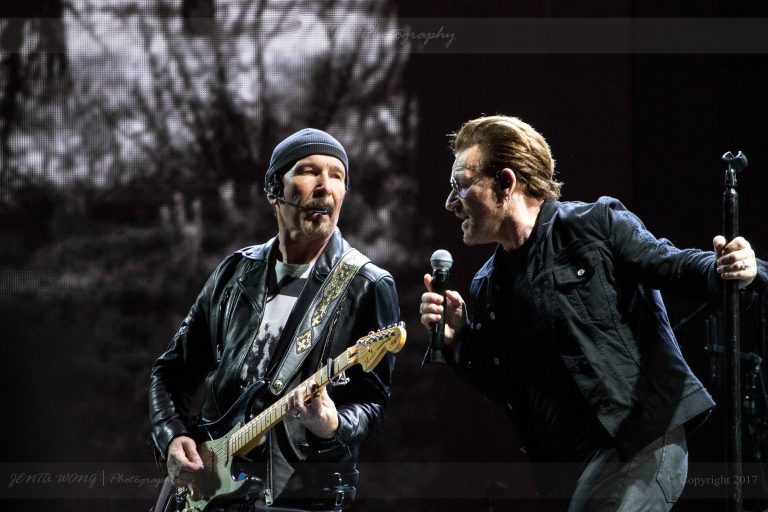 If you’re a lover of everything U2 and want to play just like The Edge, we’ve got the best guide for easy U2 songs on guitar. We have hand picked three songs that will be the easiest songs to play from the band. To go along with these songs are tutorials which you can follow along with on YouTube.

One is a song that opens up with an acoustic guitar riff which really propels the song forward. It features easy chords that are beginner friendly, making them perfect for anyone who has just started out playing.

There are only two chord progressions you will need to get your fingers around to master this song. The first is Am, Dsus2, Fmaj7 and G. This is played for the first half of the verse. You then will swap to C, Am, Fmaj7, and C again to round out the verses. Learning both of these sequences will have you covered for the entire song and that’s all you’ll need to learn to play this track.

One piece of advice you should always know as a beginner is to not be put off by the look of unusual chords such as maj7 (major 7) and sus2 (suspended 2). Their names come from music theory which you will learn on your guitar journey. What’s interesting is that the shapes you make to play them are actually easier than some standard chords such as D and F.

When you play One by U2 you should list for the light bounce that the acoustic guitar gives. Emphasizing this will make the whole song sound better.

Many music critics out there will consider this track to be one of the greatest in music history. It was released in 1987 and was the band’s second number one single on the bounce to be featured on the Us Billboard Hot 100. It’s probably one of the most famous songs the band ever wrote.

U2 are a great band to learn songs from if you want to experiment with your electric guitar and foot pedals. The guitarist from U2 often uses echo, delays and heavy reverbs to create that signature sound that U2 are known for.

Another one of U2’s most famous songs is With or Without You. It’s been featured on many different movie soundtracks and is known around the world. The song was released in 1976 and was featured in the top 100 pop songs chart. It was also voted to be one of the best songs of all time.

The brilliant thing about this track is that it follows the four chord structure that every pop song is known for. You can use one of two different chord progressions to nail this song. D, A, Bm and G uses the typical pop chord structure. An alternative way of playing as a complete novice to the guitar will be C, G, Am and F because they’re easier chords to master.

4. Staring at the Sun

Back to the acoustic guitar with Staring at the Sun, the next entry in our U2 list. You will only need to use Am, G, F and Em chords to make up the verse. These are all chords you will know as a beginner and there’s nothing that should be too much of a challenge here.

For the chorus you will switch to a C, Am, D and F chord progression – again a lot of chords that are basic and simple to play. Keep going with these two chord progressions and you will have learned the entire song. You play the track at 70 bpm and the strumming pattern is made up of 16th notes. Guitar players can get a feel for both of these things by listening to the original track.

To round out our list we are adding in a track that will be a little bit more of a challenge for guitar players. Van Diemen’s Land is an arpeggiated song that will be something new for novice guitarists. The chords used are G, Em, Cadd9, D and Bm. The hardest part here is the B minor chord which a lot of beginners find tricky.

The track is played in the key of E flat and it has a BPM of 104. You will her The Edge using some of his signature stylings in this track, including a slapback delay. This means that there are notes you can hear but that aren’t actually being played due to this technique which uses a pedal.

That’s it for our list of easy U2 guitar songs. Remember to write down your comments below for your favorite tracks from the band and take a look at our other articles on the website.

Are U2 songs easy to play on guitar?

U2 songs are easier to play on guitar than other pop hits because they generally have a slow tempo and chords that every beginner will know.

What is the easiest pop song to play on guitar?

When looking for easy pop songs, you should look at lists like these. We have loads of these guides here on our website that cover a lot of different genres including pop. Make sure to browse through our latest articles to find easy pop songs you can play on your guitar.