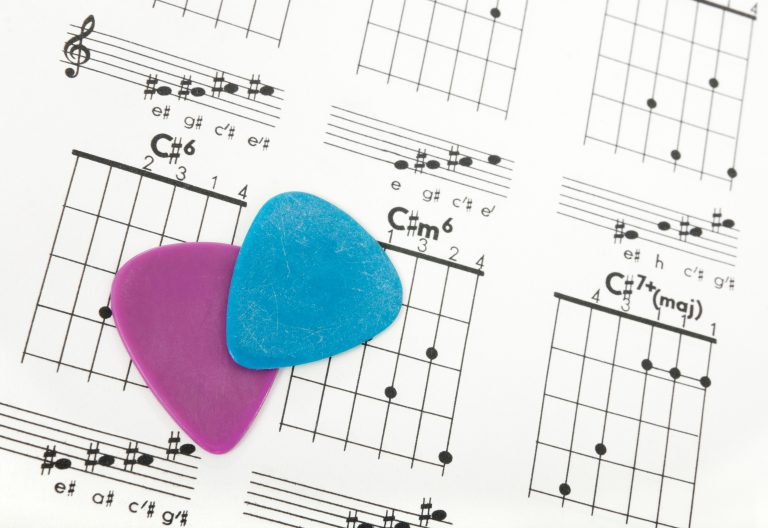 Learning to play the guitar is both rewarding and challenging at the same time. There are a lot of basic guitar chords you will need to know so that you can build a good foundation to further your playing. Once you know the guitar chords from these charts you can start to play 4 chord guitar songs along with other tunes. A lot of guides suitable for beginners can be found here on our website.

Here we are looking at 11 guitar chords chart for beginners to help you get a better understanding of how to play these at a basic level. Each chord includes the chart that goes along with it to help you play. 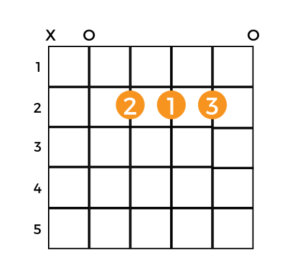 The C major chord is included in our list of beginner guitar chords because it is the one that is most widely used in popular music. To make the chord shape from the basic guitar chords chart you will need to combine the C, E and G notes. Both your second and third fingers will be at a slant to achieve the right sound. It will feel hard at first as a beginner but with more practice, your fingers will start to loosen up. Don’t let it put you off trying out more guitar chord charts.

The D major chord is unique because it has a triangular shape. You will take your first two fingers and play both E and G using the second fret. Then, use your third finger to hold down the B string at the third fret. When you play the guitar strings, the sound should be uplifting as this is one is used in many a chord progression for light-hearted songs. 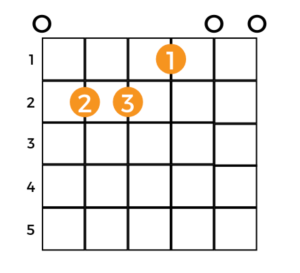 To be able to play beginner guitar chords like this, either in guitar lessons or at home, means you need to learn how to read a chord chart. The E major is one of those chord shapes that takes every string to play. Your first finger will be playing the third string on the first fret. Your second finger plays the fifth string on the second fret. Take your third finger which will be playing the fourth string at the second fret. Then hold all of them down at the same time and strum in one smooth motion. The aim is to hit every string in the same strum. 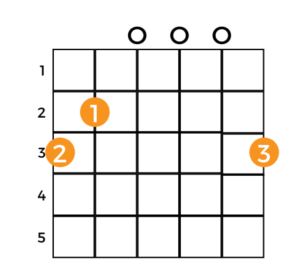 G major presents you with a little bit more of a challenge than the other new chords and chord diagrams we have included here so far. The biggest part is reaching for other chords once you have played it. To take on the challenge, learn about the correct finger placement. 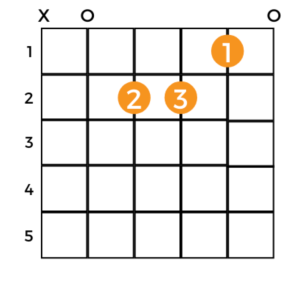 Now we’re going to get into the minor chords. If you know how to play an E major chord, the A minor should be a breeze. All it takes is for you to move your finger up by one string. The chord is also close to an A major, moving the B from the second fret onto the first. Minor chords have a sadder sound to them than the major ones but this chord is a staple for any beginner to learn.

When you are learning to play the guitar from guitar chord charts then moving on to the barre chords is a massive step in the process. Starting out with the B minor chord is a great way to get used to these types of chords. A barre chord is a technique where you place your fingers across multiple strings at the same time instead of using the tip of your finger to hold down a single note.

To play this chord, rest your finger so that it is flat against strings one to five on the second fret. Your third finger goes onto the fourth string using the fourth fret. Next, take your fourth finger and place it on the third string on the fourth fret. Your second finger needs to go onto the second string using the third fret. Now you can stum all of the strings at the same time, being careful not to hit that sixth string. 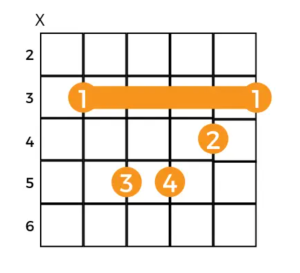 C minor is a chord that is used in a to of emotional breakup songs. It’s one of those chords that sticks around for a while after you play it. Unfortuantely for beginner guitarists, this is one of the hardest chord diagrams you will play because you have to twist yourhand in an awkward way. You will be using your pointer finger to barre on the third fret for strings one to five. You second finger goes on the B string using the fourth fret. Then you can take your third finger and put it onto the D string and your fourth finger goes onto the G string. Both of these are played using the fifth fret. 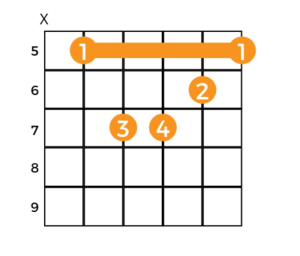 The D minor chord is almost exactly the same as the major counterpart but you’ll have to take the high E string and move it from the second fret to the first. Both the fifth and sixth strings have to be muted otherwise the chord won’t sound right when you play it. D minor is a chord that is used in a lot of genres of music, being particularly popular in country and folk songs. 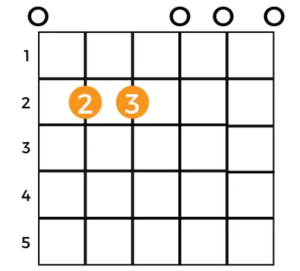 Anyone that wants to learn the easiest guitar chords first should start out with the E minor chord chart. All you have to do is play an E major chord but you remove the G string from the equation. Super easy right? 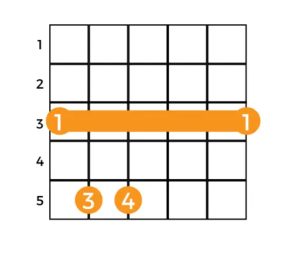 G minor is a chord that won’t crop up as you learn to play guitar. It’s not a chord that is used often in popular music. However, it can make a nice addition to a song if you want to write your own music. G minor should have a creepy tone to it if you are playing it properly. To get started, use the third fret and barre all six strings of the guitar. Then take your third finger and play the fifth string with the fifth fret. Next you will need to use your fourth finger to play the fourth string while holding down the fifth fret. Give it a confident strum to play the guitar chord properly.

Plaing chords is a constant learning process and it’s something even the greatest guitarists in the world still have to do. By studying each guitar chord chart we have provided here you can learn the correct way of playing each guitar chord that you need to form a solid foundation. Stick it out during the tougher ones and practice the right hand placement. Once you put the work in it will soon become muscle memory.

What guitar chords should I learn first?

The first chords you should learn on your guitar are Em, C, G and D. We have a great list of easy guitar chords for beginners so that you can get the basics nailed and start a solid foundation for your guitar-playing career.

What are the 5 basic guitar chords?

The five basic chord shapes you will need to create both major and minor chords are C, A, G, E and D.