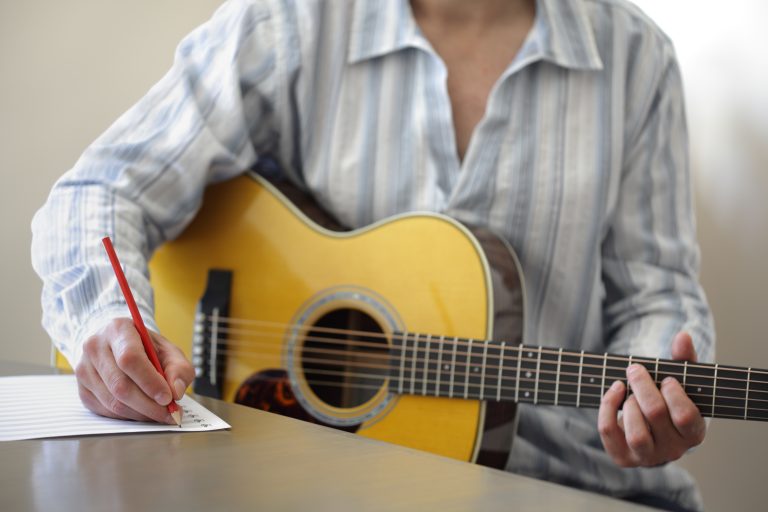 If you’ve had enough of playing easy acoustic guitar songs and want to move on to writing your own, you’ve come to the right place. The songwriting process is very personal and unique to every person and the methods you use will be different to the next person. As you write songs more and more you will evolve into your own method and discover the best way of composing for you.

As a great starting point, we’ve put together this guide that will break down the basic essentials of songwriting. You could apply these points to electric guitar too, but we’ve written the music theory here with the acoustic guitar in mind. Each section will explain a different element of writing songs so you can put them all together as a sort of musical jigsaw.

By the time you’ve read through how to write a song on acoustic guitar, you will know how to compose chord progressions, how to pen lyrics and much more. Let’s get started!

For every song that’s ever been written, there is a set of minor chords and major chords that make up the basis of the piece. You can use hundreds in a song or just two or three. If you’re already reading this then you probably already have some knowledge of music theory and guitar chords so that’s a great starting point.

In all great songs, the chord progression is named by their Roman numeral counterpart. What this means is that each chord with its key is assigned a Roman numeral based on where it sits on a scale.

In the above chord progressions, the capital Roman numerals represent major chords and the lower case ones are minor chords. In a major key, the vii will be a diminished chord.

The first part of the songwriting process is to choose the key that you want to play in. Below we have listed some of the most common chord progression choices so that you can pick one for the main structure of your piece.

If you want something a bit different and want to write your own progression then you can follow these steps to do so.

This is a simple and foolproof way of writing your own chord progression that sounds good too.

The structure of a song refers to the way the different parts are ordered. There are some genres of music that will use A sections and B sections which is a common thing in jazz music. Others will use terms such as verse and chorus which feature in pop and rock songs.

There are so many different ways that a song can be structured. You don’t have to follow the standard intro, solo, outro formation. However, most songs will include at least one verse and have a chorus that uses the same melody in each instance. Throw whatever sections you want into your song and order in a way that speaks to your creativity. We’ve included some examples of common strong structures in the videos below.

Here Comes the Sun by The Beatles

Fly Me to the Moon by Frank Sinatra

The melody is an integral part of songwriting. The melody is the part of a song that can really get stuck in your head so you want it to be catchy.

Once you’ve figured out the key for your song and the progression you want to use, it’s time to come up with the guitar and vocal melody. This is a single line of notes that sounds great when the chords are played. You can either sing it or play the notes on your guitar.

Melodies can either be super simple or really complex – it all depends on your personal preference and how you want the song to sound. Make sure that your melody is in the same key as you wrote your chord progression. That’s how you make a great song, otherwise it will sound off.

Notes for the Melody

If you are using a major key in your song then you will want to choose notes that are included in the same major scale to create your melody. The same rule applies to a song written in a minor key. Every scale has a root note and you can look at scale shapes and charts to find these out.

For every melody, there will be a collection of notes you can choose from which are included in the chord charts. There are so many notes you can use on your guitar in any given key so if you don’t want to use the standard ones, make sure to look online to find all of the notes that belong to your key.

You don’t want to just run up and down a scale of notes to make your melody. Mix it up so that the listener stays interested. You can use bigger leaps from different notes to do this. A great example of this is in the video below.

Chestnuts Roasting on an Open Fire

The rhythm and the strumming pattern of a song is what can instantly make it recognizable and can really spice up the overall mood of the piece. There are three common strumming patterns you may want to use in your song which we’ve detailed below.

You can play around with both the rhythm and strumming patterns to find what will suit the song and the mood the most.

Writing lyrics to a song is a very personal part of the creative process. Whether this is your first song or not, every songwriter will benefit from having a reliable way of writing lyrics. Below we have given you the steps to follow which will help you find the write the best lyrics for your song.

Writing a song on the acoustic guitar will differ from writing a piece on any other instrument such as the piano or electric guitar. When you choose to use an acoustic to write your song then you have a lot more options available to you. There are a lot more decisions you have to make besides the key, melody and chord progressions.

When you use standard tuning on a guitar you will be going from the lowest pitch to the highest one with a progression of notes on the strings which are E, A, D, G, B and E. However, because you are using a guitar you have alternate tunings you can use which will give you a different sound. Below we have listed these tunings so you can experiment with them.

There are so many more alternate tunings out there that you can use but the ones we have listed above are the most common if you want to use a different sound.

Using different fingerstyles on your guitar is a great way of making the song sound more interesting while still just strumming the chords. Instead of using a strumming pattern, finger the notes of the chords above by plucking each individual string that you think sounds good. The key here is repetition. You want to come up with a pattern that you will repeat so that the listener continues to be interested in the music. We have given you some fingerstyle guitar songs below as inspiration.

Let Her Go by Passenger

I Won’t Give Up by Jason Mraz

Stop this Train by John Mayer

All of the information we have included in this guide may seem like a lot to keep in your head during the songwriting process. But, the most important thing to do at the end of the day is to have some fun. Remember that this is about you and your creative juices flowing so don’t take it too seriously.

Write whatever you think sounds good and don’t bow down to what you think others might think sounds good. If you’re not happy with it, don’t write it and definitely don’t play. Writing a song that you don’t like will only end up stunning your creativity and will put you off writing any type of music in the future.

Songwriting should be treated like anything to do with music – the more you practice and do it, the better you will get at it. Try not to be discouraged if you find yourself stuck at any point during the process. Go back to the drawing board and find what works for your song.

With all of this advice ticking around in your mind it’s time to get off your phone or computer, pick up your instrument and start writing. We wish you plenty of luck on your musical adventure.