8 Most Common Guitar Chords for Beginners to Master

The most common guitar chords like C major, F major and D major are some of the first chords a guitarist will ever learn. This is because they form the foundations for all of your guitar playing and they are very straightforward and simple to learn. We have put together a list of the basic guitar chords which you will come across in your everyday practice. Before we begin we will look at the best way to learn these guitar chords to get you started. Remember to check out easy female guitar songs to put your chord chops to practice.

The Most Common Guitar Chords

Now we can jump into 15 common guitar chords which are the most important for any guitarist to learn when they first start playing the instrument. Make sure to familiarize yourself with guitar tabs before jumping in to the chords below as we have included a tab for each guitar chord in our list.

G major uses three notes which are G, B and D. Because it’s a G major chord, of course, the G will be the root. To play the G major you will need to take your point finger and place it on the fifth string and use the second fret. Next up, take your middle finger and use it on the sixth string while using the third fret. Last of all you can put your ring finger on the first string which will then use the third fret too.

Once you have the finger placement nailed and you are pressing the strings correctly, strum all six strings with open notes and not muting any. Every string is used in this chord which is why it has become a staple in many guitar pieces. As you begin to perfect your skills with more practice you may want to add a little bit more flair into your G major chord. Variations can include harmony and dissonance.

C major uses three different notes: C, D and E. Take your first pointer finger and place it onto the second string then use the first fret. You can now move to your middle finger and play the fourth string while pressing the second fret. Last of all, place your ring finger on the fifth string of the guitar and fret on the third. For this chord you will strum all of the strings apart from the sixth.

This C major guitar chord forms a nice, natural shape for your fingers and hands to make. As a beginner, it shouldn’t be to hard for you to learn and practice. 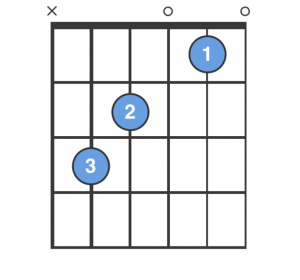 For D major you will have to use D, F sharp and A as the notes that make up the entire guitar chord. To start off, take your pointer finger and pop it onto the third string and then press down the second fret. Now you can take your ring finger and use this on the second string while pressing the third fret. Your middle finger is placed last on the first string and you will want the second fret for this one. To make sure the chord sounds right you want to strum all of them except for the A and the lower E string.

Any guitarist worth their salt will tell you that the first ever chords they learned on their guitar would be the D, G and C major chords. Once you have a good understanding of these chord shapes and have practiced them well you can switch between each one. This will not only help you become fluid at switching between chords but can also help you develop your muscle memory so that every guitar chord comes as second nature in the future. 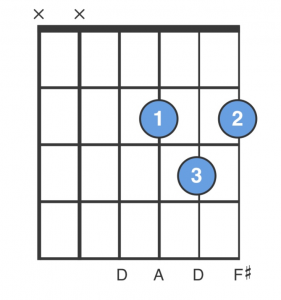 Another three-note chord is A major which consists of E, C sharp and A. This is one of the more basic chord shapes because you won’t have to stretch to reach any of the frets. Every note is placed on the second fret, which you can see in the image below. No matter how big your hands are or how flexible your fingers can be, this chord shape doesn’t take any sort of contortion to master.

Strum all of the strings apart from the sixth to make this chord ring out. It may take a couple of strums at first to make a full and complete sound. It’s important to make sure you are hitting all five of the strings as you go. This is another chord you can add to your basic music theory knowledge and is a perfect way for any beginner to start. 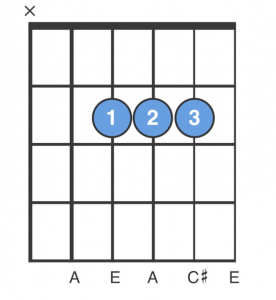 For an A minor chord you have to know your A, D and C notes. You can take your first finger which is your pointer and then place it onto the second string while using the first fret. Place your middle finger on the fourth string and then press down on the second fret. Your ring finger will sit on the third string and the second fret has to be used here.

Strum all of the strings apart from the low E which is the thickest string on your guitar. A great way to practice both your A minor and major chords is to keep switching between the two. This is a fundamental skill that every guitarist has to learn when they first start out.

It’s crucial that you can identify the difference between a major and minor chord when you start beginner guitar. This helps your musical development further down the line when you come to play proper songs. 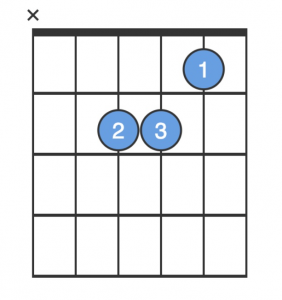 Every string is used in this chord. The E major chord is a very popular chord with artists and it features heavily in a lot of popular music. The challenge we’ll set you here is to switch between the A and E major chords so that you can get a good feel for what the middle of the fretboard has to offer. It may feel awkward and difficult to bunch your fingers up at first but you’ll get used to it eventually.

E major is one of those chords that has to be learned properly, not only because it features heavily in a lot of popular music. It takes the correct finger placement and the right fretboard knowledge which will help you develop your musical skills. This is an essential part of progressing not only as a guitarist but as a well-rounded musician too. 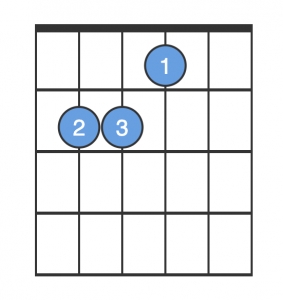 Every string is strummed in this simple chord. It’s one of the easier chord shapes that can open up a lot of possibilities in terms of playing covers or composing your own songs. While it may take you a few hours to memorize the chords properly it will pay off in the end when you move on from beginner guitar. 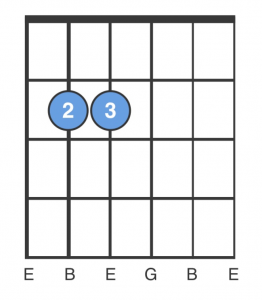 We’re moving into some of the more complex chord shapes now. Even as a beginner it’s important that you learn these, even if you feel they are difficult because they will help you further your overall playing abilities. This chord is considered to be one of the barre chords. A barre chord means that you take your pointer finger in this case and then place it across all of the strings using one fret which then acts as the root note for the chord.

The uniqueness of this chord is that you can move it to every fret on the guitar which will then end up being a new chord based on what the root note is. The F major has five notes which are F, C, A, F, C and F again. You will need to use all of your fingers with this one.

The shape you form at the beginning will feel completely unnatural to start with but barre chords are an important step in your guitar playing. It will take a lot more practice than the others we have mentioned in this list but over time it will feel better and come to your fingertips easily. 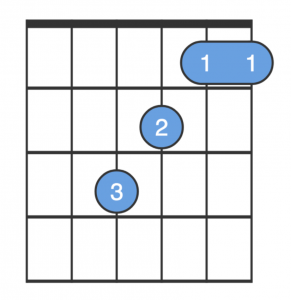 It’s important to bolster your foundation knowledge with the chords mentioned in this list. If you get bored of playing the same chords again and again you may want to find a song that features common chord shapes for beginner guitar as this will be more entertaining to play too. Happy guitar playing!

Home » Blog » 8 Most Common Guitar Chords for Beginners to Master