A Guide to Tenor Guitar Tunings and Models 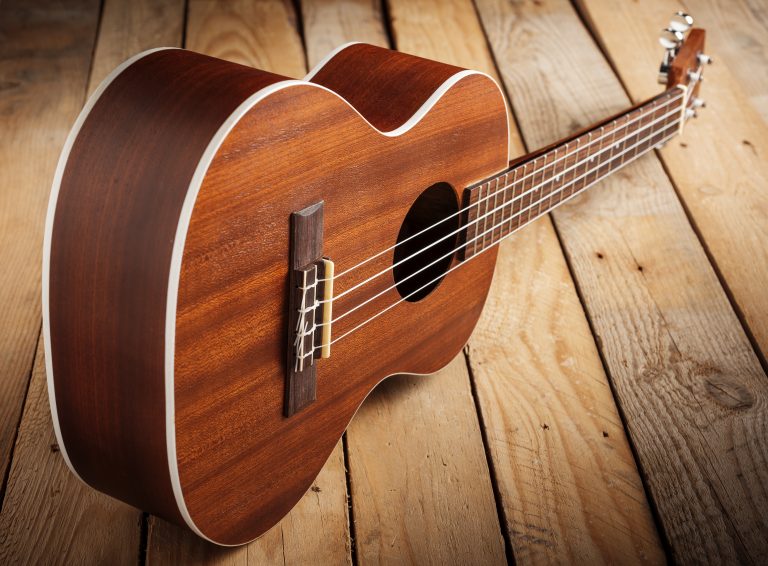 A tenor guitar can be electric or acoustic and will have four strings instead of your usual six. It is larger than a ukulele, typically being a scale length of 23 inches but can be anywhere between 20 and 25 inches.

Tenor guitars were originally made so that banjo players had a transition instrument from a banjo to the guitar. In fact, they still feature a tenor banjo neck to make that changeover easier. Over time the tenor guitar has evolved into a musical instrument in its own right, with a lot of different tunings you can use. Unlike a traditional six string guitar that would use EADGBE tuning, there is no standard when it comes to tenor guitar tunings (although some are more common than others).

In this guide, we are looking at some of the most common tenor guitar tunings, some more alternate ones and then some songs that you can play using them. Let’s find out more about the electric and acoustic tenor guitar.

What is the History of the Tenor Guitar?

To get a better understanding of tenor guitars we thought we would give you a little bit of history about the instrument. It was originally developed in the mid to late 1920s by C.F. Martin & Company along with the Gibson Guitar Company. Guitars like this were intended for tenor banjo players so they could play a guitar without having to learn all six strings.

The tenor guitar is meant to be a transition between a Dixieland tenor banjo and your conventional six string swing guitar. This was a particularly big deal at the time because this style of guitar had started to become more popular than the tenor banjo at the end of the 1920s. The trend picked up even more speed when noted banjo players during the time such as Carl Kress and Eddie Lang hung up their banjos and switched to six string guitars.

Heading into the 1930s, more major guitar makers like Selmer Guitars who worked out of Paris began making four string guitar models based on designs by the talented Mario Maccaferri, an Italian luthier. They marketed the instrument mainly to banjo players as a second guitar themed instrument.

As both the six string guitar and the five string banjo gained more popularity between the 30s and 40s, tenor banjos and tenor guitars slowly became less played. In the 50s and 60s they came back onto the scene thanks to the Dixieland jazz bands revival and the boom in folk music.

A popular rhythm guitar player by the name of Nick Reynolds who was part of The Kingston Trio played a Martin 0-18T flat top acoustic tenor guitar in the late 50s, and he was a hugely popular act of the time. In the 50s the first electric tenor guitar with a solid body also made its grand stage debut.

How Can a Tenor Guitar Be Tuned?

As with any stringed instrument, a tenor guitar requires tuning and there a lot of different tunings that are available to you. Tenors, unlike a six string guitar, are typically tuned in fifths although other tunings can be used. Guitar tuning, baritone ukulele tuning, Chicago tuning, Irish and octave mandolin tuning are all employed by tenor guitar players, particularly those who enjoy slide guitar playing.

The tuning that uses fifths is so popular because it makes the chord shapes easier and you can move them around to create more voicings which are more spread out than on a six string guitar.

This tuning is exactly the same as the top four strings of a six string guitar (the four highest ones to be exact). It’s a tuning that is commonly used on baritone ukuleles as well. DGBE is a great tuning for anyone who is trying to transition to a tenor guitar from a regular guitar model or from a baritone ukulele.

Anyone who has ever played the mandolin should be familiar with GDAE tuning. It’s the tuning that Warren Ellis uses on his song Jubilee Street which he collaborated with Nick Cave on (more of this below). Anyone who wants a wide tonal range will want to make sure they set their tenor guitar to this tuning.

Open D is a brilliant starting point for anyone who wants to learn some alternative tunings. It’s also a good one for slide guitar players because you can barre any fret straight across and create a major chord. Obviously, there are a lot more than major chords that can be achieved with open tuning on a tenor guitar.

Is anyone out there who is reading this fans of the Rolling Stones? Keith Richards is a huge fan of open G tuning which essentially uses the same chord shapes as open D tuning does. It’s got great versatility and translates well onto tenor guitars.

Much the same as we had the same tuning for the four high strings of a guitar, this tuning uses the standard tuning for the four lower strings. Using this tuning makes playing power chords much easier but there are a lot of other things you can do as well. Chords such as majors, minors and sevenths are all a lot easier to play using the EADG tuning.

Now that you know how tenor guitars are tuned in comparison to a six string guitar, we are going to go through five of the most popular songs that use these instruments.

Tiny Grimes is easily the most famous jazz guitarist who uses a tenor guitar. Tiny Tempo is his signature song and you can tell this considering the name. The song structure is very simple and straightforward, featuring three chord shapes of Bb7, Eb7 and F7. There is both a six string version and four string guitar version of this song which is best suited to the tenor guitar.

Nick Reynolds who is the lead guitarist of The Kingston Trio is also a well-known tenor guitar player who has gone down in history with this instrument. He even had his own signature tenor guitar model with the brand Martin Guitars.

The song Tom Dooley was a huge hit for the band and the best part about it is that it’s incredibly easy to play on both the string guitar and a tenor banjo. Remembering the words, however, is a little trickier but we only really care about the music anyway.

Jubilee Street was featured on the fifteenth studio album to come from Nick Cave which was titled Push the Sky. It was the second single to be listed on the album and was released in 2013. This is one of the most modern songs out there that uses tenor guitar.

The song itself, if you want to try your hand at playing it, is actually very simple. The same riff repeats over and over again throughout the entire song. So once you have nailed that riff you’re pretty much set for the rest of the song. To play the Warren Ellis tenor guitar part you will need to tune your guitar in fifths, with your lowest fourth string being tuned to a G.

Neko Case has been a tenor guitar player for a very long time which makes it a tough choice to narrow it down to just one of her songs. When she released her 2006 album titled Fox Confessor Brings the Flood, Hold On, Hold On stood out from the rest of the tracks. It is an autobiographical song that has the Sadies featured as her backing band. As a flagship song for this artist, this one is perfectly suited for anyone who is interested in playing tenor guitars.

To be able to play the song you have to know the chords of Em, C, G and D. If you want to sound exactly like the original song then a capo has to be placed on the second fret. A banjo capo which would be used for a tenor banjo is the ideal fit to get just the right sound.

We all know that Prince is easily one of the most masterful funk and rock guitarists to have ever existed. So, what’s interesting is that he didn’t actually play the solo that features on the recording for Little Red Corvette. It was Dez Dickerson who played it, but it’s still a classic rock solo that anyone who wants to master shred guitar should learn.

Of course, this isn’t a song that was originally performed using a tenor guitar. But, with just a small adjustment, it can be a perfect fit for your tenor guitar or tenor banjo as long as you tune it in fourths (otherwise known as the Chicago tuning). The chorus and solo are the only parts that feature any guitar playing so focus on these to get a feel for the song.

We hope we’ve been able to give you as much information about tenor guitar tunings to help you develop your playing skills on this wonderful instrument. Make sure to try out all of the tunings and chords we have given you in our guide above to see just how versatile tenor guitar models can be. With some more versatility than a normal guitar, tenor guitars give you the range of chord voicings to produce a lot of different styles of music. Check out the songs and give them a go to explore the tenor guitar further and, most importantly, have fun doing it.

What tuning is tenor guitar in?

Typically a tenor guitar is tuned in fifths following a CGDA note pattern. This is similar to the tenor mandola, banjo and viola, although some other tunings can be used as well.

Can you tune a tenor guitar to DGBE?

Yes, although this will sound similar to more of a baritone guitar and not the tenor guitar you are playing. Most people will use the CGDA tuning to make it sound as authentically tenor guitar as possible.

Why should I play the tenor guitar?

The tenor guitar has its own distinctive sound and style and it’s practically limitless when it comes to rhythms and music that it can create. You will often hear tenor guitars and tenor banjo stringed instruments instead of six string guitars in music such as country, western swing, jazz, pop and contemporary folk.

What artists play the tenor guitar?

There has been a huge upswing in the number of modern artists who play the tenor guitar nowadays. It’s allowed them to create a new sound and steer away from the more conventional music of the past. Contemporary musicians such as Adam Gnade, Joel Plaskett, Neko Case, Josh Rouse, Carrie Rodriguez, Ani DiFranco and Joe Craven along with Elvis Costello all have used a tenor guitar. Sonic Youth also have now dipped their toes into the tenor guitar pond.

How can I learn these tenor guitar tunings?

With all of the tunings we have given you in this guide, the best way to start learning them is to learn the chords and where the root notes of them are. Once you know where all the root notes are located on your fretboard, you’ll be able to take any chord shape you want and move it around the fretboard with no problems at all.

Home » Blog » A Guide to Tenor Guitar Tunings and Models