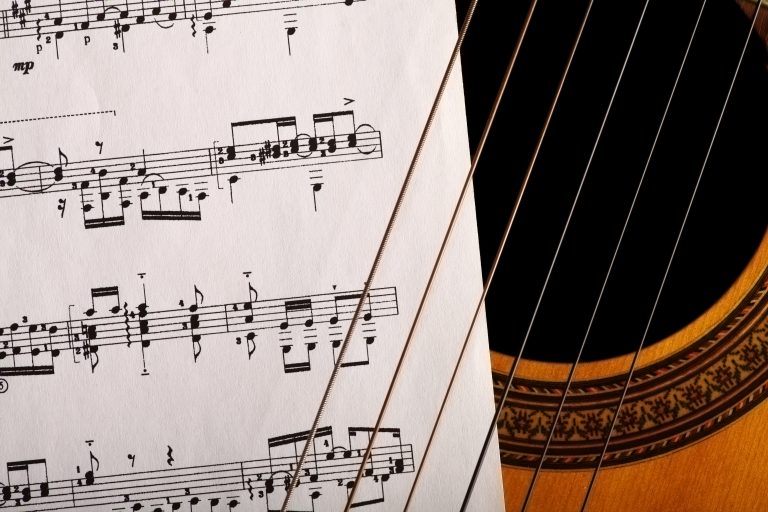 For many guitarists learning classical music can be a bit of a chore but once you start you will probably find it relaxing and soothing. Knowing the classical guitar music style means that you can build on your fingerstyle technique too.

If you are a complete beginner at playing classic music on the acoustic guitar then this list is for you. Complete with guitar tabs, we’ve listed some of the easy classical guitar songs for beginners to get you started.

Even though this classical piece was originally made for the piano it translates beautifully onto the guitar. It’s really easy to play too. Ode to Joy came from Beethoven’s Symphony No. 9 which was easily his most celebrated piece ever made.

When you listen to the original piece you may notice that at the beginning of the song there’s only one musical instrument playing. Watch any live musician play this song and that intro is usually played by one person on a stringed instrument.

As you continue into the song more instruments begin to join in with the strings. What’s great here is that a classical guitar can be used as that one instrument that starts the song and introduces all of the other instruments into the piece. Another great thing about this acoustic guitar piece is that you can use the chords for the melody over and over again without them getting boring.

If you are interested in playing this entry on our easy classical guitar songs for beginners list then you will need to have knowledge on how to read basic guitar tablature. You will also need to work on exercises that will increase the flexibility of your fingers. This is because there are quite a few different frets you will need to press down on to play the song. Our biggest tip for you with this one is to take it slow. Once you have all of the basics of the song mastered you can then go on to speed the classical music up to pace.

This is another great entry on our easy classical guitar songs list which has quickly become a favorite for many classical guitarists. It’s a really slow-paced piece that can easily set the mood for a more relaxed evening. It uses both a combination of strumming and plucking movements so the song has a lot of complexity and depth within its layers.

Although the piece from Bach may sound long it repeats itself a lot which is common with easy classical music. If you feel overwhelmed by the length then just learn one part of the song on your guitar at a time. After you’ve played it through a few times you will see that parts of the tab will become familiar so it will improve your overall confidence in playing the music.

The reason why this one is on our easy classical guitar songs list is that it’s a superb song to use for guitar warmups. Before you move into your more contemporary repertoire play this through a few times to get your fingers warmed up. By the time you move on to your other guitar playing, you will feel like your fingers are supple and ready to go.

Everyone knows the theme to Pink Panther even if they’ve never been a fan of the tv show or movies. The song is actually a highly accredited classic song that has been nominated for an Oscar and has three Grammy Awards attached to it. The composition of the music means it works well on most instruments and can be transposed well for classical guitarists to play.

This is a piece that will absolutely require you to have nylon strings attached to your guitar. This is because you will need to use a sliding technique to transfer your fingers from one fret to the next. If you have steel strings it’s more than likely that you’ll end up cutting your fingers. Nylon strings will also help you bend the notes which require it throughout the piece.

The tune of the Pink Panther is actually quite fun to play. Because nylon strings have a lower pitch they make the bass notes a lot more easy to mimic. The song is also a brilliant finger exercise that will help you develop your skills ready for other classical guitar songs.

You must be thinking we’ve gone made including this in our easy classical guitar songs list. However, this song is actually considered to be a modern classic because of the salsa vibe used throughout. If this song doesn’t make you want to get up and wiggle your hips we don’t know what will. It uses beats that feature in classic rhythm and blues as well as pop influences.

Another brilliant thing about this song is that the chords are some of the easiest to ever be played on the guitar – ever! You will only need a basic strumming pattern and then include the two chords of Gm and D to complete the song. It really doesn’t come any easier. However, if you want to play the melody note by note then this will be the tricky part which requires a more advanced fingerstyle technique.

For a new classical guitarist, this song should definitely be on your radar. Not only does the modernness of the piece make it much more relatable for younger players, but the song also has a more bassy tune which a classical guitar can replicate easily.

Everyone knows this song to be by Justin Bieber but before the Biebs did a remix of it, it was actually a classical guitar piece released by Luis Fonsi in 2017. Because the song got so much popularity from the remix it meant that Spanish pop music also got a new and reignited interest from new guitar players.

The structure of the song has been made in a way where the lyrics make up the foundation of the entire piece. Despacito is the reverse of what many artists do in that the lyrics were written first and then the melody created afterward.

The number one thing you need to have for this song if you’re interested in learning it on the guitar is a capo. If you don’t have one you can still use your open string tuning but the piece sounds a lot better if you are playing on strings with a raised pitch. This is so much easier if you have a capo and is even simpler for playing the song on your acoustic guitar.

Bach is probably one if not the most famous classical composer out there so it’s no surprise that he’s popped up on our list more than once. Being able to play this song on your guitar will stretch your finger skill to the absolute maximum. You need some quick finger work to be able to play this properly. Each string has to be pressed down onto the separate frets very quickly. If you’ve ever played Guitar Hero then you’ll be accustomed to the speed at which you need to use your fingers.

This is a very daunting song for anyone who is new to the guitar or the classical music genre. But once you have this mastered it’s a real showstopper which is sure to impress anyone listening. Bach originally composed the piece to be played on string instruments and he used a plucking technique throughout. Here we are going to swap this out for a strumming pattern. Go through each of the movements slowly at first to get used to the transitions. This piece will definitely take some work on your part and some dedication to get it right.

This song has made it onto our list because it requires you to use the body of your guitar as a percussion instrument at various intervals throughout the piece. It’s a technique that a lot of modern musicians such as Ed Sheeran use and it’s definitely one that you will want to practice as a beginner.

The song was originally composed by Maurice Ravel and he used the soundboard which sits at the front of your guitar to make the tapping sound you hear in the original. The same sound can also be achieved by using the sides of the instrument. It’s whatever feels the most comfortable for you. When played all together the sound combines really well with the rhythm you create by adding in that percussion from your instrument.

The fingerstyle here is quick as well, much like the last Bach piece we listed here. As always, it’s better off to start out slowly and then build up your speed as you gain more confidence. What you really need to focus on is keeping your thumb on that sixth string as this will act as the bass throughout the piece. While the sixth string maintains the rhythm the rest of your fingers will continue to play the first and third which include trebles. Being able to play all of these chords at the same time is no meant feat but is crucial to getting the right sound for the song.

8. Edvard Grieg – In the Hall of The Mountain King

If there are any Harry Potter fans amongst you then this song may be a little bit familiar to you. The song was included in the fourth movie of the series, the Goblet of Fire. It was, in fact, composed at some point in 1875 as an orchestral score to accompany a scene from the play Peer Gynt. There are a lot of different translations for the original Norwegian title into English so there may be discrepancies in what this song is called amongst people.

The strumming pattern for the song itself is quite simple. It’s the fretting and fingerstyle techniques that will be the trickier part of nailing the piece. Because the song starts off slowly it’s easy to pick up the notes at the beginning. As you continue to play the piece gets faster but the chords also become more complicated as more bass notes are added in. Take your time to learn each part individually and only speed the tempo up once you are confident in what you are playing.

In the Hall of The Mountain King Guitar Tab

So many people complain about classical music because they feel that it’s too boring. Andantino in G is the complete opposite of this opinion even though it’s a soft and airy piece. There’s a lot of beauty behind the melody and this is something that should be appreciated by beginner musicians.

The brilliance of this piece is that there are only 16 measures used throughout the entire song. It’s this shortness that fits beginners so well as many newcomers to the guitar have a shorter attention span for learning the basics. In terms of harmony, it’s interesting enough to keep younger players engaged and there’s a lot of skills a beginner can learn in the chords and strumming patterns of the piece.

We’ll end our list on a more modern piece that helps beginner guitarists coordinate rhythm with the movement of the fingers needed to pull off the fingerstyling used throughout the melody. In fact, it uses some serious fingerpicking throughout so as a beginner, you could really learn a lot.

As with many Oasis songs there’s a lot of guitar strumming going on throughout with picking involved to produce the top chords. When all of this is combined, although it isn’t easy, provides you with a piece of music that has a cool melody. It’s a piece that is very popular amongst the younger generation and, no doubt if you play it for other people you’ll have them singing along in no time.

Half the World Away Guitar Tab