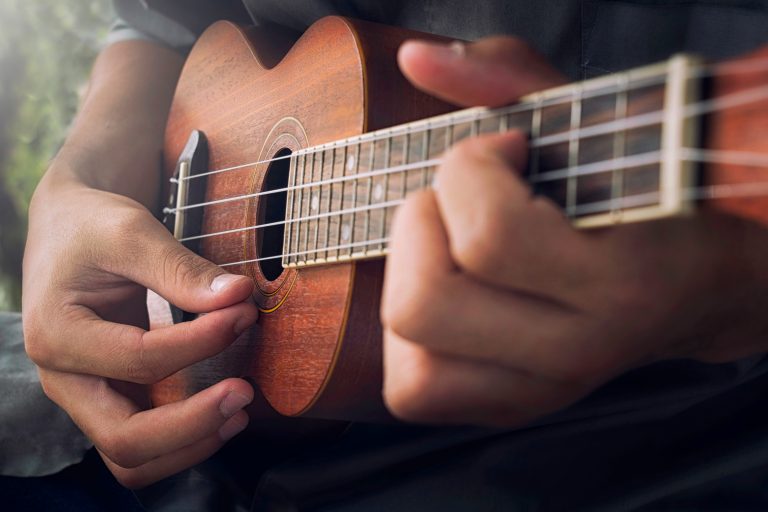 Almost every musician can name a famous guitar player but what about well-known and famous ukulele players? It’s kind of expected that ukulele players aren’t as well known because the instrument isn’t as popular. Right now the ukulele has become a hugely popular instrument thanks to modern artists bringing them back into popular culture.

With this in mind, we’re going to go through some of the most famous ukulele players out there from today and in the past. If you are a budding ukulele player make sure to find some easy ukulele songs to play as well as the best ukulele brands available on the market today.

The most famous ukulele song by far was Israel Kamakawiwo’ole’s mashup of Over the Rainbow and What a Wonderful World. The song has appeared in numerous films and shows over the years. It even got to number 12 on the Billboard Hot Digital Tracks chart back in 2004.

Israel first made his start in the music world when he was a teenager when he formed the group Makaha Son’s of Ni’ihau. After this he would launch his own solo career and record over 21 albums as an artist.

Many people know Kamakawiwow’ole’s music because it smacks of his Hawaiian heritage and traditional upbringing. His voice was incredibly moving and was almost a juxtaposition to how he presented himself.

Unfortunately, Israel passed away when he was young. He was only 38 when he died after battling obesity for most of his life and suffering from complications related to this. After his death, he was honored around the world and tributes were paid by the Hawaiian government for his dedication to music. His ashes were scattered at Makua Beach in the Pacific Ocean in 1997. If you’ve never heard of this famous ukulele player, make sure to check out his most known song below.

Jake Shimabukuro rose into the list of famous ukulele players thanks to the way he could rock the neck and frets of the instrument. When you watch him play you will notice how complex his finger work was and just how quickly he can navigate his way around the notes. He first gained his notoriety in Hawaii where he was born and then overseas in Japan in 2000. In 2006 his playing went viral on YouTube which lead him to become one of the most known ukulele players.

Nowadays Jake Shimabukuro is more popular than ever and has done work with huge artists such as Lady Gaga and Miley Cyrus. He now has been playing the ukulele for 20 years and has a lot of professional experience behind him. What’s interesting is that he is one of the only ukulele players to have a documentary made about him which can be streamed on Amazon prime.

James Hill is a slight anomaly in the ukulele player world because he doesn’t have his origins in Hawaii like so many other musicians have. Hill actually grew up in British Columbia and was taught how to be a ukulele player in school as his first instrument.

The brilliant thing about James Hill is the way he approaches playing the ukulele. He changed the instrument from something that was seen as obscure and novel in modern music to something that is well recognized with a large following. His albums have been hailed in the North American market and his 2009 album even won a Canadian Folk Music Award.

James cemented his place on our ukulele player list thanks to his instructional videos that he offers for free on YouTube and Uketropolis. He’s is an incredibly talented teacher and musician as well as a songwriter so we’ll see what he can come out with next.

Daniel Ho has a lot of albums, awards and accolades under his belt. At the moment he holds 18 solo albums, 14 Grammy Award nominations and six Grammy Awards. He also has receive a multitude of awards from Taiwan and Hawaii which has led him to leave his mark on the musical world.

Once again, Daniel Ho is a Hawaiian native who grew up around the traditional music that then went on to inspire his career. At 18 he decided to move from the island to LA and attended the Grove School of Music. After some time in this school, he decided to return to his home and took a place at the University of Hawaii to study music.

Nowadays Daniel continues to make music that pushes the boundaries of ukulele playing. He has also collaborated with the team at Romero Creations to make a line of amazing ukuleles which are available to buy online and in music stores.

Tiny Tim is actually a stage name used by the artist Herbert Butros Khaury who was born in New York in 1932. This artist was known for his voice which could reach a high falsetto pitch which he would then play along with his ukulele or mandolin. Tiny Tim has actually been credited as the first player of the ukulele to reach fame all over the world.

Tim was a constant in television and movies during his career as well as his solo adventures into albums and recording. He made multiple appearances on famous shows such as the Tonight Show and the Ed Sullivan Show.

The reason why so many people loved Tim was that he was always there to make his audience happy when he was performing and with the music he released. He knew that people laughed at his mannerisms but instead of taking this as a bad thing, he turned it around and truly enjoyed playing his ukulele in front of every crowd. If you’re interested in his most famous song as an American musician make sure to listen to ‘Tiptoe Through the Tulips’.

If you’re unsure of who Cliff Edwards is then you may know him by the nickname of Ukulele Ike. He emerged in the early 1900s as a musician who wanted to battle against the honky-tonk tunes played in saloons on broken pianos.

At the time the most popular show anywhere in town was the American spin on Vaudeville and Ukulele Ike often appeared at these shows. This led him into becoming a more serious performer who appeared in motion pictures over 100 times. If you’re still unsure of who he is, he most famously voiced the character of Jiminy Cricket in the Disney film Pinocchio as well as singing the song ‘When You Wish Upon a Star’ which went on to win an Oscar.

While a lot of his most notable accomplishments came without the use of his ukulele, he can still go down as one of the most famous players of this instrument. This is because he did a lot of work during his era to popularize the music of the ukulele. Eventually, Ike/Edwards would go on to be honored in the Ukulele Hall of Fame back in 2000.

Eddie Kamae can easily be credited as revolutionizing the way that the ukulele is played today. This is his most notable achievement to date. Before Kamae came along the ukulele was merely seen as a backup instrument to the more prominent sounds of guitar and piano. Instead of the uke being used to create simple rhythms, Eddie took it on as its own instrument that had a lot of potential for creating different music styles, solos and melodies.

Kamae is another Hall of Famer who was placed there in 2001. You may remember him as being the founding member of the group The Sons of Hawaii who gained huge amounts of fans in America. Most of his life he paid tribute to his island heritage and culture and often tried to get others interested in the music that Hawaii has to offer.

In the 80s Eddie took on a documentary project with his wife to support his cause of preserving Hawaii’s culture and history. This was named the Hawaiin Legacy Series which still gains critical acclaim today.

Unfortunately, Kamae passed away in 2017 but he lived to the ripe old age of 89. He died on the island he loved, in Honolulu, and his legacy will live on as well as his great work with the ukulele.

Grace VanderWaal became an acclaimed ukulele player when she was only 15. This is because she appeared on the hit American TV show ‘America’s Got Talent’ when she was only 12. Even though she’s only young she went on to release her own album as well as win various awards including Billboard’s Under 21 and a Teen Choice Award. Radio Disney even gave her their Best New Artist award. She was the youngest person ever to appear in Forbes in the 30 under 30 music list. Even though Grace is still new to the uke scene we know that she has a very promising career ahead of her and we’ll be waiting eagerly to see what she comes up with next.

Kalima was another pioneer of Hawaiian music as he made his way into the island’s own hall of fame. He was credited as playing a huge role in taking the ukulele from the background of American music and making it the forefront of a song as an instrument that can play a great solo.

Through his beginnings in the 40s to the 60s Jesse was part of his band which was named the Kalima Brothers. Later on he went on to record an album that featured two of his sons. Jesse was actually one of the very first ukulele players to plug in and add effects to the instrument and even went on to popularize the larger, tenor-sized version of the uke.

Genoa absolutely paved the way for female uke players such as VanderWaal to come to the forefront of American music. She was one of the most popular uke players of her time around 60 years ago. She took her inspiration from Hawaiian music thanks to being born on the island of O’ahu. She went on to inspire many an American singer and musician from this point on which is why we’ve featured her on our list. Most of Keawe’s songs were recorded between the 40s and 60s and still remain popular on the island today.

And that rounds out our list of famous ukulele players. We know that many of you will have your own opinions on who is the most known so make sure you leave your comments below and tell us why. We always love hearing from you.