Why Do Guitarists Tape Their Fingers? We Know the Answer! 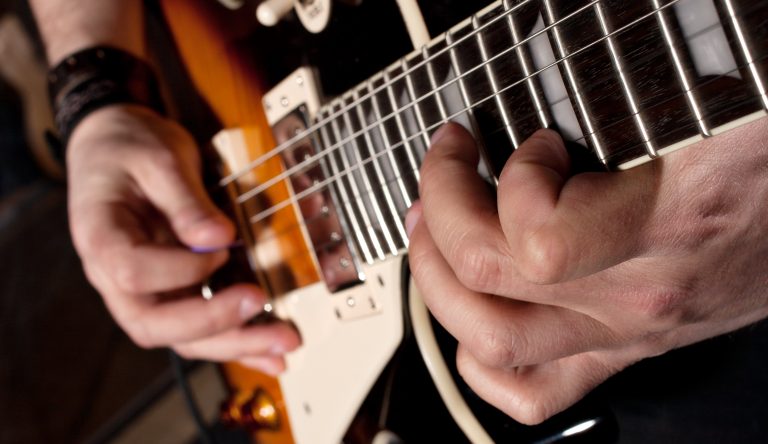 In this item, we’re going to answer all of the questions you have about using tape when playing the guitar. Let’s jump in and find out more about this peculiar playing style.

The reason guitarists use tape on their hands and fingers isn’t some fancy new playing technique. It’s actually to protect their hands and fingers. Many guitarists will have to strum the strings quickly and quite hard. Techniques such as palm muting can also cause a need for tap. By taping up their hands, the guitarist is protecting themselves from getting sharp cuts from the strings and also prevents the skin from blistering. A classical guitarist may choose not to use a pick. In this case, they will tape their fingernails to help protect them.

Reasons for the Tape

Here are the three most common reasons why a guitarist may choose to use tape on their hands:

In general, a guitarist will think it’s a good idea to tape up their right hand so they don’t suffer from any pain during their performance. A guitarist that uses palm muting a lot or tends to strum the strings hard and fast will find that taping up their knuckles to be helpful. The palm is the area of the right hand that get exposed to the guitar strings the most. If you play your guitar a lot the strings can end up damaging the skin and break open any calluses you have formed.

Playing a lot of guitar may cause your hands to become dry and eventually crack. It’s in this case that cuts from strings become incredibly painful and the bleeding can be hard to stop. The pain can be increased if you sweat too. Taping the knuckles or fingers can help prevent the skin from breaking open.

In terms of acoustic guitar players, they may choose to tape their fingertips and nails to use instead of a plectrum. The tape will also protect the nails from getting caught on a string or from wearing down while fretting.

Electric guitar players will have the idea to tape their hands to strum faster. Adding tape to the hand creates less friction against the strings of your guitar so you can move faster when playing. Many people think this will impact the sound but it won’t make much of a difference.

Which Hand Do I Tape?

If you think you want to try taping them make sure you only ever tape up your right hand that you strum with. You should never tape your fretting hand. The reason why you don’t do this is because it would make it too hard to play the frets if you had your hand taped. Not fretting properly will lead to the strings making a horrible buzzing noise.

A lot of new guitarists think that taping the fingers of their left hand will stop them from getting as sore and worn down as they would without tape. Although the tape would protect your hand, the tape would seriously inhibit the way you play.

Instead of trying to tape up your fretting hand, you want to strengthen your skin instead. This will come over time as you continue to practice. Keep moisturizing your hands and nails after every time you play to stop your skin from cracking and drying out.

If you are completely new to classical or heavier guitar then there are things you can to stop your hands and fingers from becoming sore without having to use tape. Taking regular breaks if you are playing for prolonged periods of time is a great way to prevent any soreness and pain. You should be cleaning your guitar strings after each time you play to stop any sort of oily build-up from your skin. A string should be changed after you have played with them for 100 hours. Cleaning your fretboard is also an essential piece of maintenance for your guitar that can help prevent finger pain. Everything will run much more smoothly if you keep up these routines on your guitar and it will help prevent any sort of finger or hand damage.

Which Guitarists Use Tape?

People who use their instrument in a hard way like rock and heavy metal players tend to use tape. Many people know that Kirk Hammett from Metallica often uses tape when playing for extended periods of time. He is generally seen with the tape around his knuckles. This prevents his hand from getting too beaten up as he plays metal style music on his axe.

Classical guitarists and players who use a lot of fingerstyling may also use tape on their fingertips.

A metal guitarist will suffer the most damage to both their hands and fingers because of the quick riffing they have to play. The way they strum the strings is aggressive as well, along with the palm muting technique they often use which all contributes towards causing them pain.

A classical guitarist will often use tape on their nails and fingertips as a form of protection. Because they don’t tend to use a pick, the tape protects their nails from the strings so they don’t get snagged or damaged. The tape can act as a sort of pick as well which helps them play more freely.

How to Tape Your Hands and Fingers

Here we have some answers to how you can tape up your hands, knuckles and fingers if you want to try it out.

There you have it – the answers to why some guitarists choose to tape their fingers and knuckles. If you have any more questions about good taping techniques make sure to get in touch with us and check out the other articles on our page for more great guitar playing tips.

What do guitarists put on their fingers?

Guitarists either put tape on their fingers to protect them from being damaged or they wear a slide. A slide is a tube that slips onto the end of your finger. It’s a very unique tool that allows you to slide up and down the frets to make a distinct sound.

Should I use guitar finger protectors?

Finger protectors are there for people who have very sensitive hands. However, we wouldn’t suggest you use finger protectors. They are pieces of plastic that can interfere with your playing technique as well as judging the strings. You won’t be able to perform bends or vibratos using a finger protector. You need to build up the calluses on your fingers to help you learn to play techniques like these.

Why do players tape their fingers?

The tape protects the guitarist’s hand from being cut or otherwise harmed by the strings. Tape can also help reduce the friction between your fingers and the guitar strings so you can play them faster. Fingernails can also be taped in place of using a plectrum when playing guitar.

Home » Blog » Why Do Guitarists Tape Their Fingers? We Know the Answer!

PrevPreviousIs Guitar Harder Than Piano? [Hardest to Easiest Instruments Ranked]
NextIs It Too Late to Learn Guitar? [10 Good Reasons to Get Started Today]Next